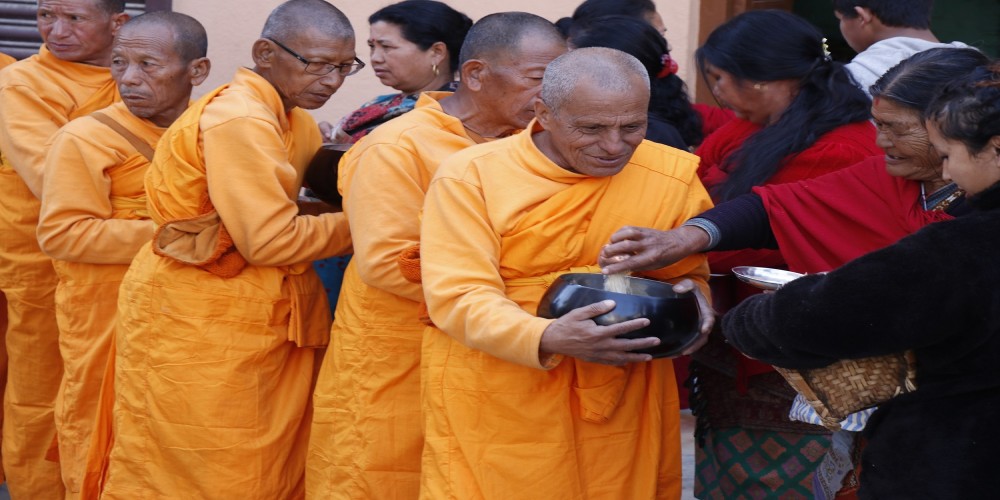 2nd Chaitra 2075, Kirtipur A group of thirty six temporary ordained buddhist monks known as Vante roam around the premises of Nagaun, Kirtipur for the purpose of begging alms as a monastic way of life on Saturday. The event was organized by Dhammakaya foundation in Thailand that was locally supported by Triratna Kirti Vihar and Nagaun Gyanmala Bhajan Khala. The procession is a part of temporary ordination for about a month long where the participant learns about the monastic way and practice; mostly of Vipasyana-insight meditation and Vinaya- ethics/ discipline.

Most of the monks attended were from Kirtipur hill, Panga and Nagaun accompanied by some from Thailand. They were ordained as temporary monks in a program held in Lumbini where Shakyamuni Buddha born. According to Bishow Raj Maharjan, who had previously participated in such occasion, "the act of temporary ordination and procession helps to develop simple and righteous way of living that ultimately helps in knowing about self and about the way to true happiness". The witnessing of the procession echoes the message of the teachings of Buddha as, "create positive actions, avoid negative actions and tame your mind".