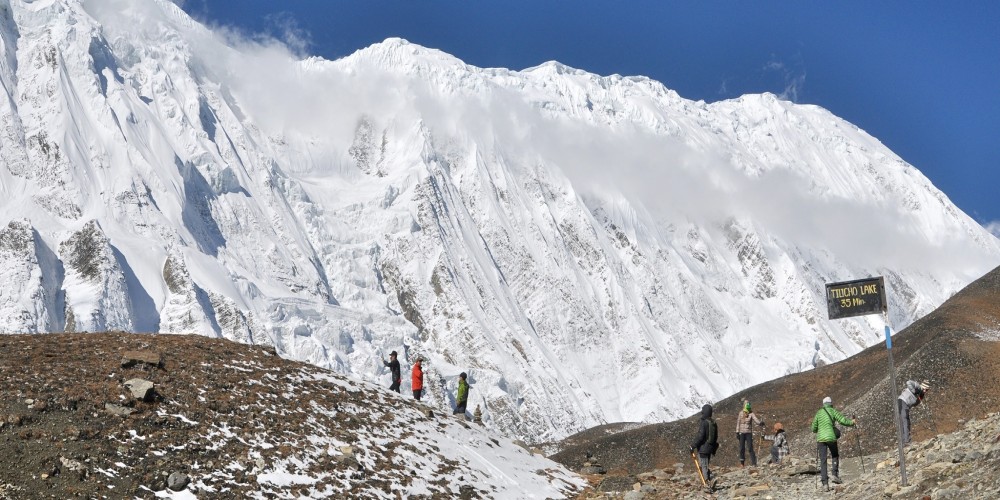 Trekking is undoubtedly the best adventure activity for long holidays. And what better a destination than Annapurna Circuit Trek?

Dashain, being the biggest and longest Hindu festival, is the ideal time for long tours like trekking. And we, a group of friends from Kirtipur, have been exploring new places through trekking for last nine years. And this year’s destination: Annapurna Circuit Trek. Announcement of ‘Ghumphir Barsa 2073’ by Nepal Tourism Board made our decision ever so relevant. And we saw amazing participants, foreign and local trekkers, around the trekking route even after what the people went through post earthquake.

Annapurna Circuit is widely known as best trekking destination of Nepal. The trail is one of the ancient trade routes between Nepal and Tibet. However, trekking route was opened for tourists in 1970’s only. The 15 to 20 days’ journey starts from Besi Sahar and ends at Pokhara. Since we did not have such a long holiday we took jeep up to Manang and shortened our trek by 10 days.

Day 1: Kathmandu to Besi Sahar: We reached at Kalanki around 6:30 am. After having breakfast we waited for our bus. Kalanki was crowded with people going home for Dashain. Everyone was anxious to get a ride and so were we. Our bus arrived only at 9 am.

After about 8 hours drive, we reached Besi Sahar (760m). We booked our room at the main bazar and went to the jeep station. Since Dashain had started, most of the drivers had already left for vacation. Fortunately, we met a businessman who agreed to manage a jeep for us.

Day 2: Besi Sahar to Humde: We woke up early and packed our stuffs. The jeep was supposed to arrive by 7 am but it arrived only at 8:30 am. The jeep had only six seats; so three of us had ourselves seated at the back of the jeep. The road was rough and narrow. We passed many landslides, small rivers, waterfalls and villages. We stopped for a lunch at Jagat and continued our ride till 6 PM. Finally we stopped at Humde (3280m) and stayed there for a night.

Day 3: Humde to Manang (Day-hike to Miralepa Cave): The food at Humde was nice and the rooms were warm. The magnificent view of Himalayas around and Humde airport beside was much rewarding. Well, otherwise who would wake up in that chilly morning, despite some rowdy noise by some crazy friends? There were traditional houses as well in addition to mountains in all directions and an abandoned airport.

We left Humde early and continued our jeep ride up to Manang. We took two rooms and a tent at Manang (3540m).

Since we gained a lot of altitude in a single day, we needed to acclimatize. Roaming around the beautiful meditation cave, we prepared ourselves. We hiked for about three hours and reached Milarepa cave (4200 m). According to the locals, Milarepa, a Tibetan monk, meditated and also took a hunter as his disciple there.

We also enjoyed magnificent view of Annapurna III and Pisang peak from there. An old man who was guarding the cave and a monastery offered us tea. She also guided us for a small tour of the monastery. We stayed there for an hour, had dry foods, chat with the old guard and came back to Manang.

Day 4: Manang to Tilicho base camp: We started our trek late at around 8 am as all of were tired because of our first hike to Milarepa cave. After just walking for 5 minutes, we reached a nice viewpoint at Manang. From the viewpoint, we could see Gangapurna lake and Annapurna range.  After taking group pictures, we left that place and headed towards Kharshang (3724m). We reached Kharshang after few hours where we took light snacks.

After passing a steep uphill trail, we reached Shree Kharka (3900m) at around 11:30 am. Right after the lunch, we rushed towards base camp. The trail was challenging and dangerous due to landslide zones. It was difficult to go downhill since the trail was too slippery. It took us almost three hours from Shree Kharka to reach the Base Camp (4150m). In Tilicho base camp, there were just three lodges. But all of them had already been booked. We found a common room mysteriously named “The Sun Room”.

Most of the trekkers start the hike early at 4 in the morning. However, we started at around 6 am since we had bad sleep. The uphill journey started right after leaving the lodge. The trail slowly took gradient and height. It was the most difficult part of the trek which definitely took the test of our physical and mental strength. However, the majestic view of Tilicho lake (4920m) made us forget every difficulties in the trail. After having some dry foods and taking a lots of pictures, we moved back to base camp.

We had our dal-bhat at Tilicho base camp. From there, we headed towards Shree Kharka where we had a comfortable sleep.

We started our day early at about 8 am. It was a beautiful day for trekking. We spotted a herd of blue sheep on the way. We went downhill for a while and then climbed again for about half a day. We reached Yak Kharka (4018 m) at about 12 pm. There were nice lodges but we did not stop there though we were very hungry. On the way, there were small shops selling apples and samosas. They were too expensive. We walked further 45 minutes and reached Ledar (4200m).  At Ledar we had fun with singing and dancing. We had a good meal there.

It was a short travel. We reached at High Camp after an easy trail up to Thorung Phedi (4450m) and an hour of difficult steep hike. After taking some rest at High Camp, we hiked a small hill, from where we saw a magical almost 360 degree view of mountains.

In the evening some of our teammates had strange feeling of hallucinations and mild headaches. We still don’t know the exact reason, but we think the altitude was to blame for. We drank garlic soup and hot water.

It was a very beautiful morning; we started walking at about 7 am. Most of the trekkers start this day at 3-4 am to avoid fierce wind. After hiking for about three hours, we reached Thorung la Pass (5416 m). It was an amazing experience at the pass. We waited for every friends, took group pictures and descended.

We walked downhill for about 4 hours and reached Muktinath (3760 m). Some of our friends bathed at famous 108 taps and worshipped at the temple. Then we walked again for 15 minutes to catch a bus to Jomsom (2720 m).

Jomsom was absolutely filled with tourists and pilgrims. We could not find a direct bus to Beni so we took a bus to Ghasha (2010 m) instead. The road was bumpy and it took us about 4 hours. We waited for another bus for 2 hours. The bus ride was difficult since the condition of road was miserable. Our bus broke down three times on the way. We reached Beni (830 m) at 10 pm. Most of the lodges were already closed. Fortunately however, we found two rooms near the bus stop.

We planned to get a comfortable bus to Kathmandu. However, in the morning, we could not get tickets because a lot of people were going back to the capital after celebrating Dashain. After wandering for about an hour from one ticket booth to another, we finally found a local bus. The bus was not comfortable, but we hopped in anyway. It took 11 hours to reach Kathmandu.

As a wise man once said, ‘Home is where the heart is’. Although we reached our homes, our hearts were tempting us to share photos with friends - photos of the distant chalked white places where our hearts overjoyed.